Tonga Room - at the Fairmont Hotel 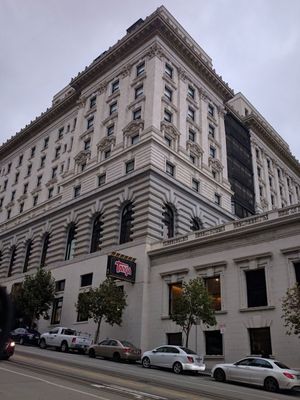 The Tonga Room is a great example of an old, classic Polynesian restaurant. It can be found in the basement floor of the upscale Fairmont Hotel in San Francisco. The Tonga Room has gone through several incarnations over the years, themed initially upon opening on September 18th, 1945 as a cruise ship (the S.S. Tonga), then in the '50s as a Mondrian-esque Chinese restaurant, then finally in the '60s the current theme of a Polynesian paradise took hold. Before becoming a restaurant, the space was the hotel's swimming pool.

The bar area of the restaurant has some impressive nautical theming, complete with a large ship's mast and sail, and plenty of rigging. There are two long dining rooms. The left dining room lies beneath a peaked-roof A-frame structure of impressive scale, with gorgeous carved details. The right dining room includes tables clustered under smaller round thatched huts, each one filled with large, colorful float lamps. Around the entire restaurant there are no shortage of old carved pieces tucked in between tropical foliage.

The dining rooms and the bar wrap around the real star attraction: a water-filled lagoon (the remains of the room's swimming pool origins), with a small tapa-lined boat with a thatched roof, where a band plays. Every thirty minutes a thunderstorm erupts, and rain falls into the pool. Unfortunately, this grand spectacle is also where the Tonga Room experience goes sadly sideways: while earlier in the evening the soundtrack is appropriate Hawaiian music, the house band plays dance hits of the '80s. The band starts playing at 8pm, at which time a cover charge is added to all bills (adding insult to the injury). The more low-key Happy Hour buffet at the Tonga Room, which goes from 5-7pm Monday-Friday, is quite popular.

In early 2009, the Fairmont announced plans to add a new tower of condominiums; this plan would have displaced the historic Tonga Room. This led to a fight against the removal of this unique piece of San Francisco history. The end result was positive: the Tonga Room is now protected under special landmark status by the City of San Francisco. The owners could still choose to close the Tonga Room, but every artifact within must be painstakingly cataloged, tracked, and preserved, and hopefully that daunting task will stave off any dreams of converting the space. The hotel has since changed ownership, and the new owners have no interest in the old condo plan.

In 2013, the menu was revamped; the tropical drinks being served are now much truer to the traditional recipes, and prepared with more care. Tonga Room's management has said that this new menu has led to a dramatic increase in bar sales, giving hope that this new trend towards a higher quality experience at the Tonga Room will continue.