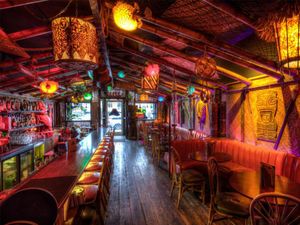 Hale Pele is a tiki bar in Northeast Portland, opened by Blair Reynolds, who ran Hale Pele until 2016 when the failure of his second bar enterprise (Americano) forced him to sell his share in Hale Pele to Martin Cate and step away. However, Blair Reynolds has another claim to fame in the world of tiki mixology: his line of flavored syrups sold under the name B.G. Reynolds which is still thriving.

Hale Pele opened in late August 2012, in a space that had previously held a tiki bar named Thatch. At the entrance, you cross a bridge past a small water feature, and are greeted by a large, sunken bar -- this allows seated bar patrons to be at eye level with their bartender. Behind the bar are a trio of large cannibal tiki carvings, these originated at Portland's Kon-Tiki and also lived for many years at the Jasmine Tree. At the very back of Hale Pele is the elevated Chieftain's Hut, a semi-private large booth, which can be reserved in advance.

The drink menu focuses on both classic tiki drinks and new creations. The bar has a small kitchen, so food is available in addition to the drink menu.