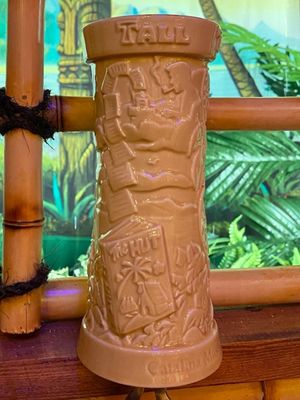 This exhibition focused on Tiki being fiction and fantasy, inspired by South Sea adventure tales. As these books were made into Hollywood movies, some of them inspired South Sea bars that laid the groundwork for Tiki. Catalina was the main shooting location for many of these films, becoming the "Tahiti of Southern California".

This mug shows one such example of a book called "The Hut" (based on Christian's Hut) being adapted to film and then adapted into the name of a bar.

Glazed in yellow with red interior. The first 100 mugs were released for the event but due to shipping delays, the rest were postponed till later -- expected to be sold by Tiki Farm online.

The recipe card included with the mug was sponsored by Deadhead rum for a drink called the "Catalina Caper".