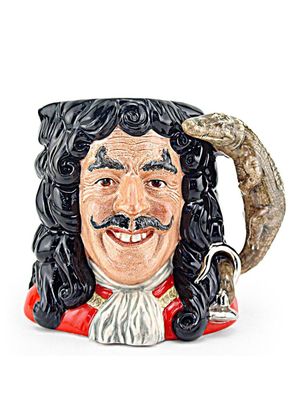 This 1994 Royal Doulton Character Jug of the Year, Captain Hook D6947, was made in England and modeled by Martin Alcock.

Captain Hook is the nemesis of Peter Pan in J.M. Barrie's famous story. Peter Pan cut off Hook's hand and fed it to a crocodile, who liked it so much he followed the Captain around in hopes of eating the rest of him. Hook managed to keep eluding his predator because the crocodile had accidentally swallowed a clock that ticked inside him and ruined the element of surprise.