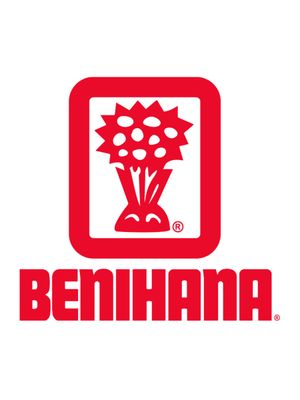 The company was founded in 1964 on West 56th Street in New York City by 25-year-old Hiroaki Aoki, the father of Steve Aoki and Devon Aoki.

Aoki, a wrestler who had qualified for but did not attend the 1960 Summer Olympics, started the restaurant with US $10,000 (equivalent to $87,371 in 2021) earned from driving an ice cream truck in Harlem. The first restaurant, Benihana of Tokyo, was named for the red safflower that was the name for the coffee shop owned by his parents in Tokyo.

Aoki's concept was for the meals to be theatrically prepared by a knife-wielding, joke-telling chef at a teppanyaki table surrounded by a wooden eating surface in front of the guests (Teppan meaning "steel grill" or "griddle" and yaki meaning "grilled" or "broiled"). It did not do well until early 1965, when Clementine Paddleford of the New York Herald Tribune gave it a rave review. The Beatles and Muhammad Ali were among the celebrities who then descended on the four-table restaurant. The restaurant then paid for itself in just 6 months.

Soon after, Rocky opened a second Benihana in New York and a third Benihana restaurant in Chicago. By 1972, there were six Benihana locations in the United States, with more opening every day. Sadly, Rocky Aoki died in 2008 at the age of 69. But, his legacy lives on with more than 70 Benihana restaurants in the United States, Caribbean, and Central and South America, and more than 100 million meals served.

NOTE: Benihana is known for its souvenir cocktail mugs, most of which come in a completely white glaze. These were put into service soon after the formation of the restaurant in the mid 60s. Some are long-running designs and some were issued for a limited time at only some locations. Among tiki mug collectors, there is great controversy as to whether these should be included as "Tiki Mugs" but they are ubiquitous and most mug hunters are familiar with them from hunting thrift stores and estate sales, if not from going to the actual restaurants. These are labeled under the site as "Orientalia" and many of them were originally used to serve mai-tais or other tropical cocktails, although it appears that some mugs can now be directly ordered from Benihana at their online shop.