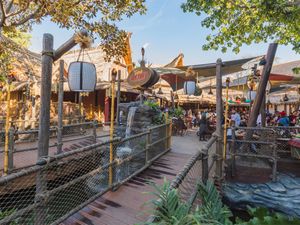 This open-air dining area opened in December 2018 and is nestled between the Jungle Cruise and Walt Disney’s Enchanted Tiki Room in Disneyland's Adventureland.

It replaces the space that had previously been Aladdin's Oasis, although there is one small section to the left as you wait in line that is still decorated with lanterns and barrels filled with Persian rugs from the Aladdin era - hearkening back to the street vending of Agrabah.

This was not a full turning back the clock to the original Tahitian Terrace, which had live shows and occupied the space before Aladdin's Oasis, but it is a significantly better use of the space - diverting traffic from the Enchanted Tiki Room's Dole whip line and providing a pressure relief valve from an area that was growing more and more congested each year. Before this, the Aladdin's Oasis was only opened sporadically as a character greeting site.

The Tropical Hideaway features an open-air dock where patrons can sit back and relax on the Jungle River waterfront while enjoying sweet and savory bites (bao dumplings or chilled ramen shaker salads) or enjoy a Dole whip. As the sun goes down, flickering torch lights illuminate the area. Rosita is also hanging out with the visitors, awaiting a Jungle Navigation Co. Ltd. boat (which is running uncharacteristically late) to take her on a journey towards a solo career. She spends her time telling jokes and reminiscing about the Hideaway from way back when.

Souvenirs from this location include collectible sporks - each with Adventureland inspired imagery on their handles - occupying an ambiguous collector niche adjacent to swizzle stick collecting.