This was one of my go-to tiki places when I lived in Portland for a time. It was nice because I could take my family there. I liked going to Hale Pele also but couldn't take my young son with me. At Vic's though, he could have food and mocktails. I was here on several occasions and was really bummed to hear that it closed. I remember my favorite drink there besides the traditional mai tai was their fog cutter. 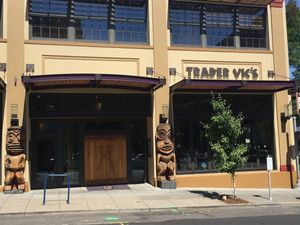 This Trader Vic's location opened in Portland in June 2011. There was a Trader Vic's in Portland from the '50s through the '90s in the Benson Hotel, just a short distance south of this new location.

In early March 2016, a small fire in the medical offices above caused some minor damage to a small patch of the ceiling. Though the repairs were to be covered by insurance, the owners of the location opted to close the restaurant entirely.

One of the two large exterior tikis that used to flank the entrance to the Portland Trader Vic's before it closed (around 8' tall with large lips, a small nose, and concentric Tangaroan-style eyes) now resides in a Dubai Trader Vic's.