I was here a few times to catch up on whether the tiki in the bushes was still there and what had become of the place. Never made it past the front gates, though. Usually a momentary stop on the way to Bahooka's. 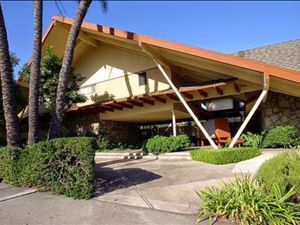 This apartment complex was built in 1961.

It has 47 units and the front features a very large A-frame. There is also a smaller A-frame pool house building in back.

Traveling from north to south along Rosemead boulevard, this was a frequent stop for tiki enthusiasts before hitting other landmarks like the Kahlua Apartments and Bahooka.

It was remodeled in 2008 and re-named "Huntington at Pasadena" to cash in on their proximity to The Huntington Museum, but before this, it was known as "The Outrigger" and had a unique tiki in front that was partially obscured by shrubbery.

Sven Kirsten, when referring to Tiki Archaeology, often showed a photo of this tiki completely covered in foliage with one hand sweeping the leaves aside to reveal a tiki eye peering out.