I actually was last at Munktiki's on 10/11/2013 to pick up a Johnny Ku mug after purchasing online -- at their Portland location before they moved to Astoria. I was here for a couple of tiki parties as well back when they were in Portland. I've been to Astoria, but not since they established there. Hope to get there one day soon. 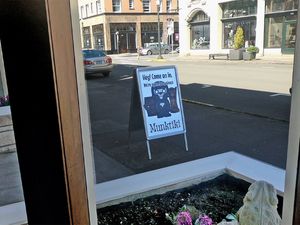 This listing is describing a physical location for the Munktiki business.

Munktiki is a father-son outfit that started in early 2000, and their specialty is crafting beautiful, high-quality tiki mugs. Paul Nielsen (the Dad) has been selling his ceramic crafts since he was in high school in the '60s; his son Miles "Stuckie" Nielsen has similarly been dabbling in clay since he was a child. Paul made his first tiki mug in 1997.

Most Munktiki mugs are of their own design; each mug has a character name on the back, and a number and date on the bottom. Many Munktiki mugs are fiercely collected limited editions, notably the "Shecky" mug based on the Tiki Central mascot designed by Tikifish.

There is also a Munktiki Imports line with their designs crafted in China and then imported to the United States. These are more commonly used with large wholesale orders. These are marked as such on the bottom and are less expensive than the pieces crafted in-house.

Munktiki's original location was in Pacific Grove, California (near Monterey), at 561 Junipero Ave. In 2009, Munktiki moved to Portland, Oregon. In 2017, the business again moved to Astoria, Oregon.

Munktiki items can be purchased through the Munktiki website, eBay, and a limited number of retailers.