Le Fern - at The Caliente Tropics

I was here for the SHAG signing and Exotica Moderne Magazine release at Tiki Caliente. I didn't have any of the drinks here at the bar. They were rotating the menu and I recall that I had missed out on the previous menu which had a couple that looked interesting to me, so opted to go next door to The Reef instead. Decor was great though and I enjoyed visiting with everyone! 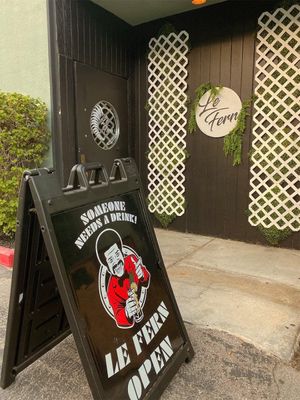 “A la 70s, fern bars have always fascinated me,” Rory Snyder says. “It’s my generation. The term ‘yacht rock’ coined about 10 years ago, is the music of Michael McDonald, Kenny Loggins, Steely Dan. It has a huge history. Think TGIF’s as a typical fern bar.”

Catering to more feminine tastes, fern bars were inspired by the early feminist era when women, earning their own money, began going to bars where they felt safe to go alone.

Le Fern offers more modern fresh produce libations such as lime, basil and other juice and herb concoctions. Club sandwiches, cheese fondue and other 70s throwback eats are on the menu.

With the closing of Oceanic Arts, Snyder was able to acquire an original Ed Crissman carved tiki at auction (several of which already reside at the Caliente Tropics) and this Crissman tiki is prominently displayed at Le Fern and served as inspiration for one of their tiki mugs.

Although some purists may decry fern bars as "tiki adjacent" at best or, at worst, part of the much lamented tiki devolution that took place in the 70s and 80s, Le Fern has some pieces (including the Ed Crissman carving) that far outshine those in other tiki bars.

Le Fern is also bigger than the sum of its parts when considered as part of the greater Caliente Tropics complex.