This was my first visit to a genuine tiki bar when I came out to live in California. My cousin Mike and his family took me and I didn't realize then that "Tiki" was a scene. I just thought it was a cool restaurant. For a time, I lived in Pasadena and this became a regular go-to restaurant for me and my family. Still miss it. 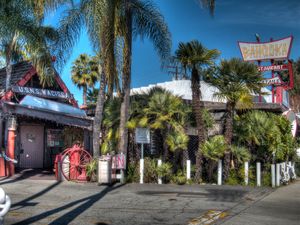 This was the second Bahooka location (opened in 1976), and the one that lasted into the new millennium. The original location in West Covina operated from 1967 until 1980.

The exterior was decorated with pier pilings and long lengths of thick nautical chain strung between them. Also on display was an anti-aircraft cannon. The chain and cannon were painted white.

The interior of Bahooka was lit quite dimly, which contributed to its labyrinthine feel. The building was appraised at 8,598 square feet and had seating for 350 patrons and a banquet room that served 80. Aquariums were everywhere -- over 100. The decor could perhaps be described as more nautical than truly tiki, with many items salvaged from the same Navy scrap yard in Long Beach where they obtained the chain and anti-aircraft cannon outside.

Some of the more eclectic items included an old set of post office boxes flanked by Marquesan tiki poles in the front lobby, a vintage standing visible gas pump with glass cylinder at top, and an old set of sliding metal jail cell doors that could "lock up" patrons eating in the "jail booth".

Tikis could be found throughout Bahooka. Some of them were vintage pieces and some by more modern carvers.

They would make any drink a flaming drink -- even non-alcoholic ones.

Near the entrance was an aquarium holding a rather large, decades-old fish, a Pacu named Rufus, who ate carrot sticks. The pacu is a close relative of the piranha, and has become known as "the testicle-eating fish" after some unfortunate incidents in Papua New Guinea's Sepik River. Rufus was much beloved, however, and stuck to carrots.

Bahooka was also featured briefly in the film Fear & Loathing in Las Vegas.

At the beginning of 2013, it was announced that the owners of the building had sold it to a group intending to gut it of all decor and turn it into a Chinese buffet. The decorations were sold, with much of it winding up at Clifton's Pacific Seas (the jail cell doors, the gas pump, the largest tiki on premises...).

The current whereabouts of Rufus are unknown, despite a massive fundraising to re-home him and an offer by Damon's in Glendale. The new owners of the building were unwilling to produce him, however, leading to speculation that Rufus did not survive the transfer from his old tank.

After the building's remodel, it was home to at least one or two short-lived Chinese restaurants. As of July, 2022, it is home to a Boston Lobster restaurant.