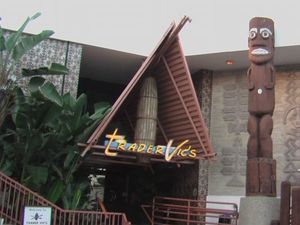 This Trader Vic's was located in the Beverly Hilton and until 2004 was owned by Merv Griffin -- the hallway between the hotel and the restaurant was lined with blown-up black & white photos of Griffin with various celebrities from the 70s and 80s. It was originally called The Traders. Its location at the edge of Beverly Hills attracted some of the vintage set of celebrities.

The Beverly Hills Trader Vic's last day of business was on April 29, 2007. After 50-plus years of operation, this Los Angeles institution was closed, to make way for the development of a tower of condos or hotel rooms.