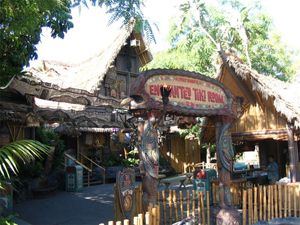 This attraction in the Adventureland section of Disneyland was Walt Disney's first use of Audio-Animatronics for an attraction, and has over 225 fully automated, moving figures. It was originally developed as an attraction for the New York 1964 World's Fair, but when the sponsor fell through, the show was changed and planned for Disneyland instead. An early development concept was that this would be a Polynesian restaurant, but when the attraction was still in design, it was decided that turnover in the restaurant would be an issue -- the fear was that patrons would be so fascinated with the moving and talking birds and tikis that they wouldn't ever leave their table. Instead, the attraction was made into the 17 minute seated show you see today.