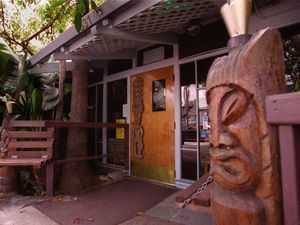 The Royal Hawaiian opened in 1947. It was owned by the Cabang family. The Cabangs were originally from the Phillipines and were friends with both of the Fillipino Tiki carvers in L.A. at the time, Milan Guanko and Andres Bumatay. These talented artists both supplied Tikis for the restaurant. The prominent Andres Bumatay tikis outside the restaurant became weathered and destroyed and were later replaced by modern carvings.

The Royal Hawaiian also had a sister location located in Anaheim in the 1950s.

The Royal Hawaiian has been through several iterations. It originally had several small dining rooms with glass-walled dioramas filled with tikis and plants, great lamps, bamboo, thatch and sea grass matting, and a bar with a fireplace and pufferfish. There were lovely oil paintings throughout, including a large piece hung directly above the hostess stand.

In spring 2006, the restaurant was sold to a new owner, who gutted it. The newer, tiki-stripped version closed for good in 2012. In 2016, the space reopened, again with the name Royal Hawaiian, this time by people who wanted to bring back its rich tiki history. The new owners, Mo Honarkar and daughters Hasty and Nikisa, worked to bring back a fully-decorated Royal Hawaiian with the help of Bamboo Ben.

However in January-February 2019, the restaurant was closed for yet another remodel and then re-opened under the auspices of chef Mariano “Maro” Molteni. Honarkar’s company remained as landlords, while Molteni owned and operated the restaurant which he rebranded as the "Royal Hawaiian Fire Grill". Molteni's remodel (which came as a surprise to the landlords) removed much of Bamboo Ben's decor, especially natural materials like lauhala matting and thatching in favor of dark blue painted walls and a "cleaner" and "less cluttered" look. There were still tikis and accent pieces, but the interior was much reduced from its former full tiki glory.