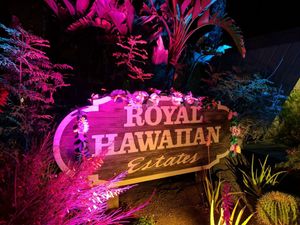 The Royal Hawaiian Estates were built in 1960 and opened on New Year's Day 1961. It is a complex of 12 buildings containing 40 condominium homes with two shared central swimming pools, designed by the famous mid-century architect Donald Wexler and his partner at the time, Richard Harrison. The developer was Philip Short, and ownership was initially restricted to Jewish buyers over the age of 55 (Jewish people were not allowed to buy in the other private communities around Palm Springs at that time). Some of Hollywood's movers and shakers owned units as a vacation home in the 1960s. The property fell into disrepair in the 1990s and many of the defining architectural elements were removed. Restoration began in the 2010s, and today the mostly-restored complex is the first Historic Residential District in Palm Springs. The artist Shag (who has a store in Palm Springs) has a tikified vacation home in the complex.