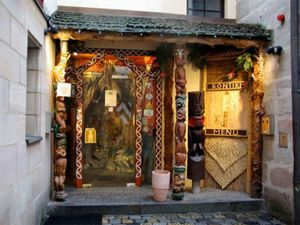 KonTiki is a restaurant and bar located in the Old Town section of Nrnberg, in old fishermen's houses along the Pegnitz river. It originally opened in 1978; a fire in January 2002 forced the KonTiki to close, after replacing some of the damaged furnishings with new replacements it reopened in the summer of 2002. KonTiki features a restaurant (Polynesien World), and two bars (Sea Bar and Tiki Bar). The space is elaborately decorated, with beachcomber lighting, rock walls, bamboo and plenty of carved details.