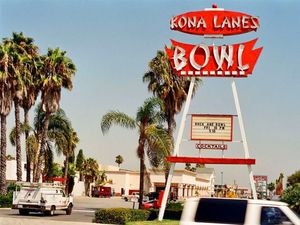 At its peak, under the proprietorship of Dick Stoeffler, Kona Lanes was one of the most successful bowling alleys in the country, open 24 hours, with 40 lanes. Over the years the business declined, and eventually Henry Segerstrom, owner of the property, wanted to redevelop it into something that would generate more money -- a Kohl's. After nearly 50 years in operation, Kona Lanes closed in May 2003, and was demolished in late June of that year. Kona Lanes had a large, double-sided neon sign; fortunately the American Sign Museum in Ohio was able to acquire the sign before demolition, thanks to a rescue and donation by Donco Signs of Anaheim.