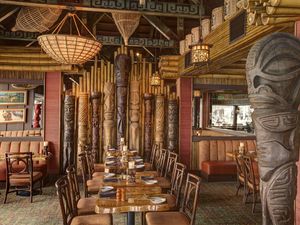 This Trader Vic's location supplanted the nearby original Oakland Trader Vic's, and has been the company's flagship restaurant since it opened in 1972. The Emeryville Trader Vic's is positioned near the end of a spit in San Francisco Bay, and has beautiful views of the nearby marina and city lights across the water.

The Emeryville Trader Vic's closed at the end of April 2010 for renovations, and reopened on September 28, 2010. The newly-refreshed Trader Vic's Emeryville has a stronger focus on tiki decor, and works to strike the balance between the sunny blue marina view and the moodiness of a traditional Tiki bar. Many of the carvings, lighting and other decorative elements have come from other, now-closed Trader Vic's restaurants from around the globe.

The restaurant is large, with several banquet rooms available for private parties. There is a large bar area near the entrance, and two dining rooms at the back of the restaurant.