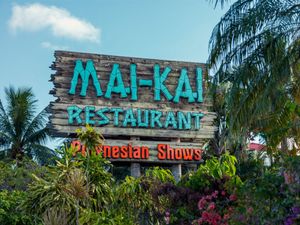 The Mai-Kai is perhaps the last of the grand Polynesian palaces still operating from when tiki was at its peak in the late '50s and early '60s. That the Mai-Kai not only still exists today, but is vibrant and thriving, is something we should all be very grateful forbut not take for granted.

The Mai-Kai was opened December 28th, 1956 by two brothers from Chicago, Bob and Jack Thornton, in an age when roadside attractions were springing up all over Florida; eventually Bob took over the business. Like many of these attractions, the Mai-Kai grew over time to be quite a spectacleit includes eight dining rooms, a bar that on its own would stand as perhaps the best tiki bar in the world, tropical gardens with walking paths and waterfalls, a stage in the center to showcase the Polynesian floor show, and of course, a gift shop.

Today, experiencing the Mai-Kai is much as it was in the '60s. The experience begins as you listen to the wooden slat bridge you drive over to reach the porte cochere and valets. As you enter the restaurant, you are greeted by an elegant maitre'd. Be sure to bring some singles when you visit the restroom, as the bathroom has attendants on hand to assist you. The Mai-Kai's manager is Kern Mattei, who took over the position from his father.

Bob and Jack have passed away, and the restaurant is now run by Bob's wife Mirielle. Bob met Mirielle when she joined the Mai-Kai as a Tahitian dancer, and still today she runs the Mai-Kai's Polynesian revue. As new dances are added to the show, Mirielle first visits the island where the dance originates to ensure it will be performed properly and will be blessed by its people. All dining rooms overlook the popular show, and dinner reservations are recommended.

The enchanting nature of the female form is something that is celebrated throughout Polynesian pop, but perhaps nowhere quite so extensively as the Mai-Kai. The beautiful waitresses to this day are attired in bikini tops and wraparound sarongs. For many years, a Mai-Kai calendar was offered featuring the many beautiful women of the Mai-Kai. This worship reaches its zenith with the Mystery Drink, delivered by the Mystery Girl, an experience that must be witnessed to be fully appreciated, so I will not describe it here, but rather urge you to visit the Mai-Kai yourself and order one.

In February 2015, the Mai-Kai was added to the National Register of Historic Places.

At the end of October 2020, the Mai-Kai announced what was hoped to be a temporary closure because of flooding and damage caused by heavy rains. This damage proved to be more extensive and the costs of repair more prohibitive than expected. Eventually, on January 21st, 2020, the Mai-Kai announced that it was making the business available for acquisition or joint-venture development.

On September 28th, 2021, the Mai-Kai made public that after considering numerous interested parties, the Thornton family agreed to a new joint venture with the Barlington Group, a South Florida-based real estate investment and development company focused on growing unique and eclectic legacy businesses that give their communities character, and Mad Room Hospitality, the proprietors of iconic establishments such as Ball and Chain, Los Altos and Taquerias El Mexicano.

*NOTE: !!! The current expected target reopening timeframe of The Mai-Kai is Spring of 2023 !!!