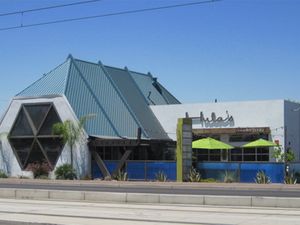 This first Hula's Modern Tiki opened on Central Avenue in Phoenix in late 2009 and was re-located to uptown Phoenix in 2018. It came from the same minds behind the hit Hula's restaurants in Monterey and Santa Cruz. The concept with the Central location (and later iterations of the "Modern Tiki" concept) was a bit different -- while the Monterey and Santa Cruz locations have more of a surf-meets-tiki feel, the aesthetic here was a mix of midcentury modern and tiki.

The dominant feature of the space was a massive, hexagonal window that looked straight out of a '70s sci-fi film set (the building actually dated to 1965). The interiors were all sleek, but executed with a variety of organic materials to bring a sort of barely-primitive feel. The indoor area featured a large bar, and there was outdoor dining.

There was at least one large Tiki tOny tiki. Tiki mugs, especially from Munktiki, filled cases around the restaurant. Volcano bowl drinks were available, and drinks were served in glassware with the Hula's tiki logo. Like the other Hula's locations, it won rave reviews for its food.

The Central Avenue location is now currently home to a new restaurant called Persepshen as of October 2019.