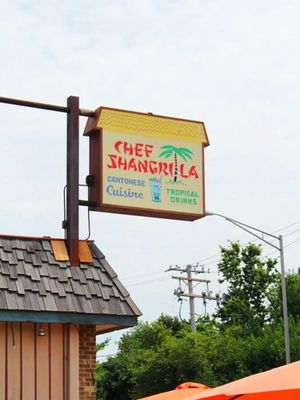 For some reason, this gem of a restaurant often gets forgotten... likely because Chicago is a relatively tiki-rich city. Chef Shangri-La deserves a visit, as its drinks are spot-on, and the food is predictably and somehow appropriately mediocre. The place has a sort of almost neglected, run-down feel, but the bones are there, and there are tikis everywhere. The bar in particular has recently undergone a rare remodel that has improved the feel of the place.

Chef Shangri-La himself, owner Paul Fong, could often be found there before his passing in 2012. Before opening his own Polynesian restaurant, Fong was the chef at the now-defunct Shangri-La restaurant in Chicago.

The restaurant has a few Witco pieces, including a very large Ku that greets you immediately upon entry. These pieces are some of the last Witco items produced; Witco went out of business one year after Chef Shangri-La opened.

They also have a small gift shop.