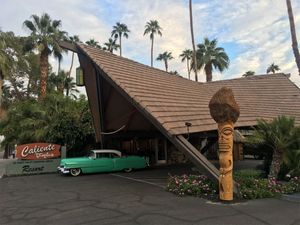 The Caliente Tropics Resort began its life as simply "The Tropics" when it was opened in 1964 by Ken Kimes. Kimes owned 40 motels, and five of them were the Polynesian-themed Tropics chain with locations in Blythe, Indio, Modesto and Rosemead. The Kimes family later earned headlines when Ken's wife Sante and son Kenny were wanted, and later tried & convicted, for a variety of crimes including murder and kidnapping.

In its '60s heyday, the Tropics, especially its Congo Room steakhouse and underground Cellar bar, attracted the celebrities of the era who lived and vacationed in Palm Springs, including members of the Rat Pack. The front of the resort held a Sambo's coffee shop. In later years, the Cellar bar was closed, and the Congo Room became the Reef Bar.

The Tropics fell into rough times in the '80s, attracting unsavory characters who disrespected the hotel. The hotel was rescued by new owners in 2000, and after a $2.2 million renovation, it was restored to its former tiki glory.

A couple years later the Reef Bar was remodeled to bring it up to speed with the newly refreshed hotel, with bamboo work by Bamboo Ben. In 2006, the Reef Bar was transferred to independent owners, and was called Hawaiian Bill's.

In 2009, the Reef Bar/Hawaiian Bill's had been gutted of all tiki details, and the hotel was advertising the restaurant/bar space on site as available for lease. They were planning on making some major architectural changes to the building, including the removal of an A-frame entrance to the bar and restaurant. Thankfully, that didn't happen.

In February 2017, Rory Snyder took over and refreshed The Reef Bar overlooking the pool.

**Since 2009, Caliente Tropics resort has been host to the annual Tiki Caliente event (as well as other tiki events like Circa Caliente) which some describe as a smaller and more intimate version of what Tiki Oasis is like now. The resort also sees a great deal of traffic during Palm Springs' Modern Week.