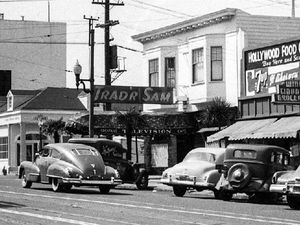 Trad'r Sam is the oldest, longest-operating tiki bar in the world. Trad'r Sam opened in 1937, and was originally owned by Sam Baylon. This small and very old bar started as pre-tiki, and is an extremely rare example of the bamboo bars that were in some cities in the '30s. The bar has a series of seating areas around the perimeter of the bar which are each named after islands, and are framed in rattan. The bar itself is a large, horseshoe-shaped structure, also encrusted in rattan.

Back in the day there were huge bunches of bananas hanging from the ceiling and the bartenders were dressed in pith helmets and safari clothing.

Today, there are still tropical drinks available, but this bar is now more of a loveable dive than anything.

Cocktail enthusiasts shouldn't miss the world famous tequila destination bar across the street just a block and a half away, Tommy's Mexican Restaurant.