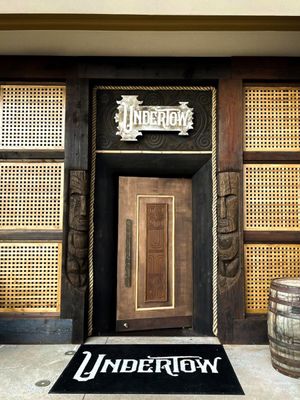 On Tuesday, October 11th, 2022 Barter & Shake Cocktail Entertainment, the hospitality group behind the award-winning Century Grand in Phoenix, opened their second location of UnderTow (the third in a series including the original that closed) at the Epicenter at Agritopia in Gilbert, Arizona. Marking the group’s first expansion, the new location offers an immersive experience complete with special effects, transportive décor and exotic cocktails that bring guests on a novel adventure with every sip.

At UnderTow, guests embark on a 90-minute worldly journey in the belly of a spice trader’s turn-of-the-century Clipper ship, following the adventures of revered Captain John Mallory and his crew. Similar to its original location, the new bar features signature design elements such as a hand-carved bar top and a figurehead salvaged from the bow of a ship. The experiential atmosphere also features custom-made thunderstorm and lighting effects and a new surround sound system to provide an enhanced audio experience, along with handcrafted carvings from Daniel “Tiki Diablo” Gallardo and illustrations by Tom “Thor” Thordarson.

The cocktail menu features a variety of on-theme signature drinks, classics with a twist, and non-alcoholic libations. Some of the drinks included are The Missionary’s Downfall, the Mai Tai, the Clear Skies & Tropical Winds and the Shipless Sailor.

The menu also features a wide selection of rums.