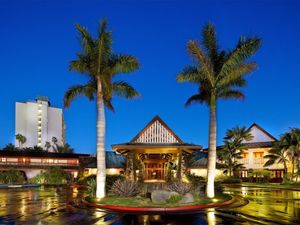 A classic tropical resort hotel on Mission Bay. Originally built by the Scripps family as a Spanish Colonial style summer house, the buildings were rebuilt in a Hawaiian Colonial style in the late '50s to better fit in with the tropical grounds. The hotel's been renovated many times since then without losing its Tiki touches.

Throughout the decades, the Evans family has gone to great lengths to import traditional Pacific Island art. All of the ethnic art including spears, personal jewelry, hand-woven rugs, and warrior shields are from New Guinea and were made prior to World War II. As you face the front desk, look above and you will see a very large tapa cloth made of Mulberry bark. It is from the New Hebrides Islands located off the coast of New Guinea. When this piece was commissioned, it was the largest one done since 1920 and took many different island families over a year to make. The wood that makes up the front desk is called Black Koa wood, which is native to the Tahitian Islands. The totem poles throughout the property were handcrafted in Bali specifically for the Catamaran. As you approach the stairs on the way to the Atoll restaurant, look to your left and you will see a large carving encased in glass that looks like a stool. This piece of art is known as the "speaking stool." It was found by Michael Rockefeller in a headhunter village in 1961. This stool is the second largest one known in existence.