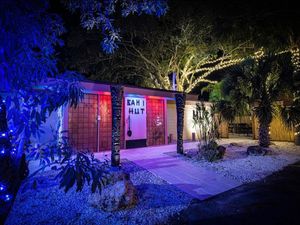 Bahi Hut was opened in 1954 by Bill Johnson, and remains a beloved neighborhood bar and local landmark. For many years it operated as more of a beer bar, although some tropical drinks were available.

In 2018 it underwent a grand restoration and by all accounts was quite successful.

They kept a couple of their previous cocktails on the menu (especially their version of a "mai tai" which was beloved by locals for being strong...even if considered unbalanced and inauthentic by most tikifiles used to Trader Vic standards) but have revamped the rest of their cocktail menu and have climbed back from being just a beer bar.

It is part of the Golden Host Resort, a vintage roadside motel.