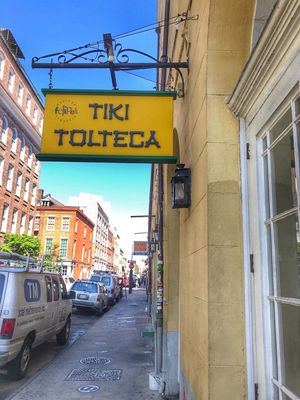 When Tiki Tolteca opened in May 2013, it was the first tiki bar to operate in New Orleans in decades. It sat within a Mexican taqueria called Felipe's, and as such was a blend of Tiki and Latin American influences. They made their own syrups and used fresh juices, and incorporated south-of-the-border spirits like mezcal, pisco and cachaa beyond the expected rum. Food was available from Felipe's below.

The space blended exposed brick with bamboo and thatch, and there were many beachcomber lamps. Drinks were served in tiki mugs, or in the heavy, blue-rimmed glasses that are familiar in Mexican restaurants.

On September 27th, 2021, Tiki Tolteca announced their permanent closure... with the caveat that they might still host private events on occasion within the space.