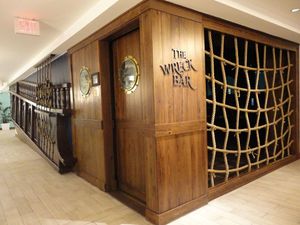 The newly renovated B Ocean resort hotel was built in 1956 and originally known as the Yankee Clipper. Under new ownership, it has some new additions, like the Naked Crab restaurant on one end of the lobby. But across from the restaurant, the Wreck Bar remains pretty much unchanged. With its nautical flair, stained glass and rope elements, it’s fashioned to look like a Spanish Galleon ship that didn’t make it quite to shore — hence the name. Above the bar, six large portholes offer views into one of the retro hotel’s swimming pools. From 1956 until 1965, the Yankee Clipper hosted swim shows, incorporating the portholes. Marina Anderson started MeduSirena — an underwater spectacle featuring a team of figure swimmers, the Aquaticats — at Wreck Bar in 2006 as an homage to that past.

Although technically a nautical bar and not a tiki bar, The Wreck does incorporate some Indonesian style tiki masks in its main room. Also, Marina herself, has become a headlining personality at many tiki events and the Wreck Bar has become almost synonymous with her and the Aquaticats.