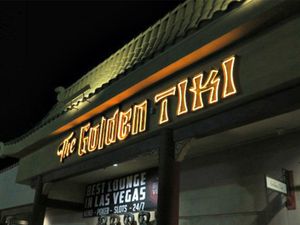 The Golden Tiki opened in Las Vegas' Chinatown on July 24, 2015. The man behind The Golden Tiki, Branden Powers, has been part of the nightclub scene in Las Vegas for some time now (he was Creative Director at the Hard Rock Hotel), but is himself a longtime lover of Tiki, having spent some of his youth DJing Exotica tunes at the Islands Restaurant in San Diego's Hanalei Hotel.

The Golden Tiki is in a large space, 4,000 square feet, and split into four different zones. The interior design and build out were done by Danny "Tiki Diablo" Gallardo. The bar has a thatched roof, and is topped by an animatronic talking tiki head, named Goldy, created by Erik "Irk" Hedman. A loveseat-sized artificial giant clam is popular for photos.

A flaming pu-pu platter is available on Friday and Saturday nights.