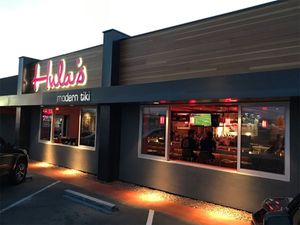 "In 2018, after 10 amazing years on Central Avenue, HULA’S surfed into an all-new location in uptown Phoenix. Led by partner Chris Delaney (who is the design soul of HULA’S) we stripped the old, dark space back to its mid-century modern bones, added a soaring central bar, the top embedded with tumbled sea glass, and built out a spacious indoor-outdoor dining patio replete with HULA’S signature fire pit. Plus, we added HULA’S first-ever private dining space (The Tiki Room) and a nautical-themed craft cocktail bar/lounge called The Captain’s Cabin."

Hula's modern re-located here in 2018 from their original location on Central Avenue (2009-2018) and then opened a location on High Street as well, making a grand total of three Hula's locations in Arizona if you include the Scottsdale location as well.

The main area is pretty sparse, going with the modern aesthetic/theme but there are a couple of tikis outside flanking the door and there are some tiki plaques at the back of the room close to the restrooms. Inside there is colored mood lighting but also bar televisions set to sports channels.

For tikiphiles, you may want to call ahead if you have a large group and reserve the more lavish Tiki Room area in back which is preceded by a large tiki and mug shelf display -- and upon entering reveals a more traditionally tiki atmosphere with lauhala matting on the walls, a large swag lamp in the center, more tiki plaques, and padded benches covered in tropical barkcloth print fabric. This room is served just as another portion of the main Hula's restaurant with the same food and cocktail menu.

However, outside and from an unmarked door separate from the rest of Hula's is a speakeasy style bar called The Captain's Cabin, which has its own cocktail menu and is housed inside a room meant to resemble its namesake with rough planking and nautical furnishings. It does not have its own bathroom so you may have to go next door to Hulas. See separate listing for this Captain's Cabin bar...