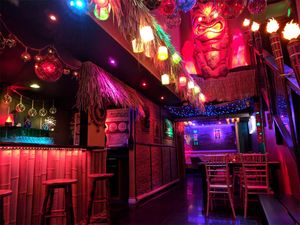 A tiki bar and speakeasy with a beer focus, Forbidden Cove belongs to its Kearny Mesa neighbor, Kilowatt Brewing.

The Kilowatt crew has opened Forbidden Cove inside their original Kearny Mesa brewery, accessible through a cloaked entrance. The space is a tiki-enthusiasts dream with a touch of psychedelic inspired neon and blacklight nuance that Kilowatt patrons have come to know and love. Being Forbidden Cove cannot serve distilled liquor, the menu is beer-based tiki drinks, as well as those made with Kilowatt Brewing’s hard seltzers and "undistilled spirits".

Open Thursday, Friday and Saturday evenings, the Cove is only accessible if you make online reservations. Wait in the Kilowatt tasting room for an escort, who will guide you to the Cove via secret entrance.

The clock was ticking upon opening for this location as the landlord had already announced their intention to demolish the space in a year and a half, but then COVID happened, so the future remains uncertain...