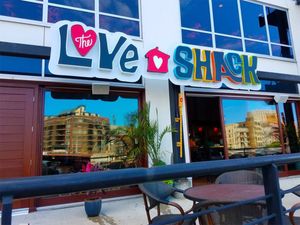 The Love Shack opened at the end of June 2017 in the Walker's Point neighborhood of Milwaukee, in a location previously held by Wine Maniacs. It was owned by Michael Sorge, Wes Shaver, and Gary LaCourt. The name was inspired by the song by the B-52s; the owners hoped to capture the energy of the song in the space. It was advertised as a "tiki bar" but there were few recognizable tiki elements in the design of the space. There was a large riverside patio, and the decor was mostly plain, "modern" design with a few bold tropical elements (including tiki head graphics). A small selection of traditional tiki drinks was offered alongside newer creations, and the food menu was high-end Polynesian-inspired fare.

As of 2021, now home to Elle Studio & Wellness, a holistic health center.