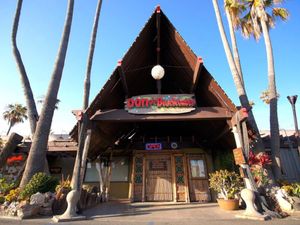 The most densely tikified area was the Dagger Bar, which was dark and filled with carved posts and pufferfish lights. The main dining room was more bright and airy, and had a large tiki watching over diners. The back of the restaurant was the deluxe "Hidden Village," available for special occasions, with a stage area, raised huts and second bar.

The owners of the restaurant did not own the lot of land it sat on, and periodically over the last decade or so prior to its close, there were threats of the restaurant being bulldozed to make room for a new condominium development. The threat seemed to rise and fall with the economy, and news came in June 2015 that the owners of the lot were asking for it to be rezoned for high-density occupation.

As of April 15th, 2018, Don's was closed down. Much of the interior decor was removed and put in storage. Part of the building was rented out to a restaurant named The Himalayan Grill as a temporary lease until they could find a permanent brick-and-mortar location. Delia Wu Snyder publicly stated she was looking for a new location for Don's to re-open.

*NOTE: According to the Tampa Bay Business Journal as of Aug 19, 2022, a Tampa-based hospitality company has acquired the intellectual property of an iconic California restaurant brand. Marc Brown, president of 23 Restaurant Services, told the Tampa Bay Business Journal that the company has finalized a deal to purchase the Don the Beachcomber brand from Delia Snyder, who had owned it since 2003. Financial terms of the deal were not disclosed. 23 Restaurant Services is the parent company of Ford’s Garage, Tiki Docks and Yeoman’s Cask and Lion. Some aspects of the Don the Beachcomber brand will be incorporated into Tiki Docks locations, and 23 Restaurant Services is also looking for stand-alone sites for the concept, Brown said.